So the running continued pretty well. I managed to keep at it all through September and October, and signed up to do the MoRunning 5K at the beginning of November as my end-of-course goal (mostly because it happened on the right weekend, to be honest).

Though I didn't ever quite manage to run for the whole 5K distance, I did get encouragingly speedier over the course of the six weeks, and the weather was mostly kind to me.

Then, at the beginning of the final week of the course, I was running as usual when I started to feel a bit of an ache up the back of my left heel. It wasn't bad, so I kept going. Then, towards the end of the run, I got a shooting pain that didn't go away and had to sit down on the pavement.

I waited it out a bit, but it didn't get any better, and eventually I limped home, iced it, and later tried heat on it. The pain faded a bit, but returned to some extent whenever I put weight on the ankle.

So, unfortunately, the 5K run did not happen, which was a great disappointment to me.

I have been trying to keep it active since, but as I think it is the tendon that I've injured and they are notoriously slow to heal, I'm not sure that running is going to happen in the forseeable future.
Posted by K at 12:44 am 16 comments:

Well, the running hit a slight bump in the road the weekend before last, when my sore throat turned into a full-on cold (with cold sweats and feeling shaky and shivery) and then a cough. Which didn't really help with the running. I had to postpone the last run of week 1 until I was feeling better and more reliably able to breathe.

However, I did pick it up again on Tuesday (still coughing a bit, but not enough to hold me back) and haven't really lost too much ground; I did Week 2 on  Thursday, Saturday and today, and if I run Wednesday-Friday-Sunday and then start Week 4 on Tuesday again I will be back in sync with the rest of the group. I can do this.

Today I ran my 1km in 6 minutes 56 seconds - my first time under seven minutes since I started, and I'm quite pleased with that. My feet aren't hurting, either. On my next workout, the distance run goes up - and I will admit, I'm a bit daunted. But everyone else has to do it too...

The Peanut was also unwell and had to have a couple of days off nursery, to his grief (he loves nursery). However, he's back up to speed now. We have been using a sticker chart to persuade him to stop sucking his thumb in the early morning when he wakes up (five stickers earns a bribe - this week's was a Thomas the Tank Engine comic) but I'm not sure he's taking it all that seriously, to be honest. He likes stickers, but he can live without them. At the moment he's announcing each evening whether he will have a wet or dry thumb in the morning and he's almost always correct...
Posted by K at 10:34 pm 2 comments:

Out for my second run today. I was doing quite well to get out, since I have had a sore throat for the past few days and felt pretty rough this morning, but I was feeling better by late afternoon.

It all went smoothly although there were definitely more people (and cars) around at 5pm than at 1.30 - I guess they're all going home from work! So I had slightly more of an audience... oh well. The traffic didn't come along at any point when I actually wanted to cross the road, which was handy. My feet didn't hurt this time, so hopefully I have learned how to tie my laces properly after all these years.

I have got RunKeeper working now, although I haven't yet figured out how to enter a workout with splits, so I had to do all the bits as separate workouts. Not a big deal. The GPS appears to work pretty well, despite the route being down in a valley.

So I'm seeing quite an improvement in the numbers from last time: a whopping 1:56 faster on the walk (lacing my trainers properly must really have made a difference!) and 35 seconds quicker on the run. It helps to have the somewhat strict RunKeeper lady telling me when I've done five minutes; I did the last part of the run the quickest, probably because I wasn't worrying about peaking too soon by then.

I went out for my first Up and Running run today!

I'd downloaded an app called Runkeeper but hadn't got it working yet. So I stuck to the fairly low-tech method of the stopwatch function on my phone, plus a pre-plotted route and pencil and paper. I'm not going to post the full details, but Week 1 involves a 1K walk and then another 1K adding in some running, and I'm going to list the times for those parts of the workout.

I decided to go running in the industrial estate close to my house. Ooh, the glamour - but it's actually fairly nice: one side of the road has trees running along a riverbank with a golf course and a large hill on the far bank. The other side is metal warehouse-looking buildings but you can't have everything! It's reasonably flat, which is rare around here, and the traffic is quiet. It takes just under five minutes to walk there from my house, which is handy.

The fast-walk stage went fairly well but felt like hard work. By this point I was quite warm (not going to wear a longsleeved top next time) and my feet were hurting, because although I know that my feet expand when they get warm, I always lace my trainers too tightly to start with. The last bit of the km was on the road, and as I was marching along uphill past some roadworks, one of the guys called out "Shouldn't you be running?" Thanks, pal.

After pausing to stretch again and loosen my laces a bit I ran back the same way. I didn't run anything like the whole time, but it seemed to pass much quicker so I knew I was managing to go faster. By the time I got back to my start point I was glowing all over!

Last week was a bit less than ideal diet-wise since it was my birthday (hello 35), we had guests, and we went out to eat several times. Not that I'm complaining about any of that! You can't always expect to have perfect control over where and when you eat and what's on offer.

So on the whole I was happy that the scales today say exactly what they said last week - no move in either direction.

I had a lovely birthday - my brother came down and I went for lunch with him, J, my lovely mother-in-law and the Sweetpea (the Peanut had been hustled off to nursery after a sandwich lunch; his timetable at the moment doesn't really allow for going out to lunch on weekdays). I also got a variety of splendid gifts including a necklace with planets on, books, DVDs, a knitting kit and some quilting fabric. Highly satisfactory!

Then on Wednesday J, MIL and I took the kids to Almond Valley Heritage Centre and they saw lots of animals and learned what you do with a trampoline: 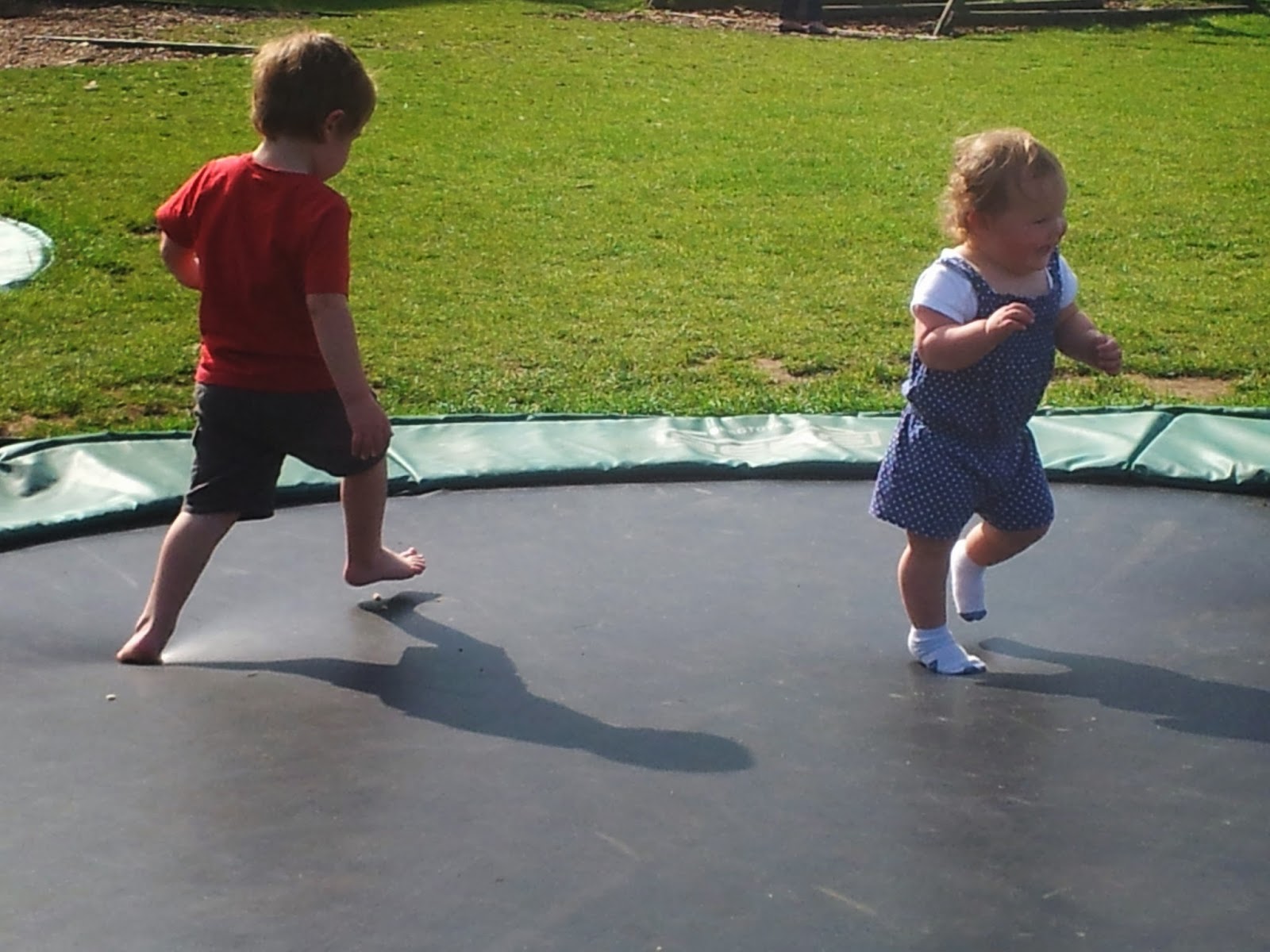 J and I went out to Pizza Express on Friday by ourselves, after MIL reminded us that we were yet to take her up on her offer of a meal and babysitting for an anniversary present. That was very pleasant too. Though it was a bit chilly coming home. Wednesday was very sunny, but the year is ticking on.

(It is traditional at this point to say something about increased muscle mass or water weight but I don't really think those are the reasons.)

I've been doing well at the snack-avoiding, have had nothing sugary other than the odd bit of fruit, and I've moved somewhat more than the week before, I think. I've done a fair amount of brisk walking with the buggy, enough to get hot. I have been very hungry in the evenings, though...

Two possibilities: the snack-avoiding doesn't amount to as many calories as I thought, and it isn't making enough difference; or it amounts to more than I thought and the body is protesting and going into starvation mode. Which seems unlikely. I guess I'm going to have to count calories for a bit and see what my daily intake actually is. Maybe I'll start on Wednesday; tomorrow is my birthday and I believe there will be cake (in moderate quantities, OK?)

I'd have to say that in the past, I've tried calorie-counting and the numbers have sat stubbornly in the same place unless I was doing a lot of exercise as well. Still, onwards and upwards (or downwards, I hope).

The Up and Running fora are now open for chat, but the actual running doesn't start properly until next week (the first week is all about motivation and mindsets). I may take myself out for a little trot at some point regardless. I haven't managed to get a sports watch yet, though, so perhaps it's just as well we're not starting the timed stuff yet.
Posted by K at 4:29 pm 12 comments:

Eating: going OK so far. Exercise: not so good, but I have plans.

So far I have stuck to the plan of not eating between meals, and I hope it's doing something, because (not that I'm moaning, or anything) I'm hungry rather a lot of the time. The reason why I decided to do it this way is that I tend not to eat mindfully between meals. I don't THINK it adds up to much at the time, but over the course of the day it probably does.

The daytime is all right - plenty of other things to think about - but during the evening I am having to exert a bit of willpower. There is fairly substantial evidence that it's healthier not to eat late in the evening, so if I can train myself not to, that will be a bonus. I've been knocking off various sewing and mending projects.

Exercising... I could absolutely have gone out for a couple of hours this morning, and I didn't (I did do a fair amount of cleaning instead; my husband's been doing most of the housework this summer to let me study, so it's my turn). I haven't added anything to the activity I would normally do.

This is somewhat feeble since my afternoons, for example, aren't nearly as busy as they used to be; my son's at nursery school and my daughter has a nap for two hours (which does mean someone needs to be in the house, but I could get an exercise video or something... bleah. I never much fancy exercise videos.)

So some mindset adjustment needs to happen. I have signed up for the Up and Running 5K running course, which requires you to do three one-hour training sessions a week - and if I can't schedule three measly hours out of 168 in a week, then that really is a bit feeble! And, you know, I've paid money for it now...

It doesn't start until the 8th, but that's less than a week!